Disclaimer: I am not a doctor or a nurse. I am simply a mom who has been forced to search deeper and ask more questions than most parents have to because I have a child with developmental issues. And what I have found, seen and heard has lead to a deep un-trust in our medical community.  What most people do not realize is that there is a huge conflict of interest between the FDA, CDC, drug companies and doctors.

For example, the FDA (Food and Drug Administration) is composed of 30 advisory committees that are divided by product, such as food, devices, drugs, and body systems. The role of these committees, is to offer the very best advice possible and to lend credibility to the FDA decision-making processes by having public discussions of controversial topics. To serve on these committees, members must not have any financial or intellectual biases. Intellectual biases arise when a committee member is somehow involved with the creation of the drug or company that is being evaluated. However, in just two years,  the CDC (center of disease control and prevention) issued 803 waivers to members on the FDA committees for conflict of interests. In fact, in the 57 meetings on regulatory policy during this time period, committee members were found to have some sort of conflict 91% of the time. (paraphrased from yalemedlaw.com)

So what you have is members of the FDA pushing for certain drugs and vaccines to be approved (even if the substance has proven to be harmful) because they stand to gain something from it. And the CDC, has become lax in its enforcement of rules on the FDA.  Why? Because members of the CDC are also in big leagues with the drug companies. Want some alarming stats to back that up?

*The Chairman of the CDC's advisory committee until very recently owned 600 shares of stock in Merck, a pharmaceutical company with an active vaccine division.

*Four out of eight CDC advisory committee members who voted to approve guidelines for the rotavirus vaccine in June 1998 had financial ties to pharmaceutical companies that were developing different versions of the vaccine.

*Three out of five FDA advisory committee members who voted to approve the rotavirus vaccine in December 1997 had financial ties to pharmaceutical companies that were developing different versions of the vaccine. (Majority Staff Report-Committee on Government Reform-U.S. House of Representatives-June 15, 2000)

But it doesn't end there.

Once these harmful drugs and vaccines are passed by the FDA, drug companies mass produce them.  And where and how do doctors decide what drugs to prescribe and which vaccines to administor? From drug company representatives of course:

They haunt offices of physicians offering bribes in the form of candy for the office staff for "just a minute to talk to the doctor," to free samples, inscribed pens, to lavish gifts including cherished tickets to college and professional sports games, trips and dinners in fancy restaurants. In fact a whopping 30 % of the marketing budgets of pharmaceutical companies is used to "educate " physicians and lure them into writing prescriptions for their latest banner drug. Other obvious methods of drug use seduction are television and print media ads to encourage people to request a specific medication from their doctors. (Nancy O'Connor, Ph.D.)

So, in a nut-shell, the FDA  and CDC have become just another front for the unscrupulous drug companies who value profit more than developing drugs that can save lives.  And even more so, I would argue that many of these drugs and vaccines that they pass cause more harm than good and actually end lives.

I guess you are probably wondering what this has to do with Josiah, right? Well, quite a lot actually.  Truth be told, it has a lot to do with Eli and Addy Jo too.  With Eli coming down with Chicken Pox last week, I heard this a lot: "Children still get chicken pox? I thought vaccinations prevented that in children these days."

I found myself trying to explain over and over again as to why we have made the decision to not vaccinate.  Some people were very understanding and others just didn't understand it at all because they don't know what I know.  And what I know now, I wish I would have known earlier or we never would have vaccinated Josiah at all.

Like most parents, we followed the vaccination schedule to a T for the first 18 months of Josiah's life without questioning it much.  But then we started noticing that Josiah's speech wasn't developing like it should have been.  And then my nephew was diagnosed with autism right after receiving the MMR vaccine.  Before the vaccine, he was perfectly normal. The day after the vaccine, he got sick, started flapping his arms, stopped talking, started walking on his tip toes, etc.  Coincidence? Maybe, but I don't think so.  I started reading every credible source that I could about the link between vaccines and autism.  And the amount of reports like Micah's and Josiah's was alarming.

But there isn't a link between vaccines and autism, right? So the experts say. But who are the experts? Who even has the power and control to prove that there is a link? The FDA and CDC! And who has the ability to reform our vaccines? The drug companies! They would all lose millions of dollars if such a link actually existed. It's just an on-going wheel of greed and corruption!

And if you are waiting for "this link" to be "proven", you will probably be waiting forever. It is something that you are going to have to prove to yourself.  Start by checking out the ingredients in the vaccines that are shot into your children every few months.  You can find a list here.

Now, I am no expert and I do not claim to be. However, I do have "some" common sense and can put two and two together. Is it no wonder that Josiah's hair test results showed very high amounts of aluminum and other metals?

And did you know that thimerosal contains mercury? Mercury can cause neurological, immunological, psychological and enzymatic issues and can be instrumental in or cause Alzheimer's, autism, heart disease, autoimmune disease, endocrine problems, and neurological and behavioral issues. Yet, it is still found in trace amounts in some of our vaccines.

I am not naïve. I know that a vaccine cannot be an easy or cheap thing to make.  And I can't ignore the fact that vaccines have played a large part in the eradication of many fatal illnesses and diseases in our world today. For that, I am very thankful.  But I can't turn a blind eye to a new epidemic that is spreading.  And that epidemic is the alarming rise in autism and other developmental problems in our children.

What I would like to see happen is for our FDA/CDC/drug companies/doctors come together and produce safe vaccines for our children. Unfortunately, I don't think I will see this in my lifetime. This greatly saddens me because I want my children to be safely vaccinated.

So, I guess I will get off of my soap box now. I just wanted everyone to know exactly why we have made the decision to not vaccinate our children for now. Now, let me  bring you up to date on Josiah....

Around 18 months, we stopped vaccinating and we spent a lot of time, energy and money into helping Josiah and getting him to talk between speech therapy, special diets, and a very expensive doctor. We saw zero improvement.  Then we moved to Lawton and we felt like God was telling us to just stop and enjoy him.  And that is what we have been doing for the past 14 months.  But for the last couple of weeks, I have felt like God has been pushing us to be proactive again. But this time, we have a different game plan.

Right now, we are in the process of having Josiah's ears checked.  Last week, he did very well and passed his test with the audiologist. He was then referred to an ENT who will take a close look at the inside structure of his ears and also check under his tongue to make sure it doesn't need to be clipped.  We are still waiting to hear back from the ENT as to when that appointment will be.

Though I really hope that it's a problem with his ears or tongue, my heart of hearts tells me that it isn't.  Josiah's pediatrician seems to agree which is why she referred him to a child psychiatrist who will evaluate him to see if he needs further testing.  I'm almost positive that he will. Honestly, I think he has Asperger's syndrome or falls somewhere on the high functioning autism spectrum.  If the only red flag was him not communicating, then I wouldn't feel this way.  However, it's more than just the lack of communication.  Here are some of the other red flags:

*most of the time, he would rather play by himself without much social interaction. And it takes him a long time to warm up to new people. He also hates large crowds.  Especially if he doesn't recognize anyone.  We have had several melt-downs because of this.

*Josiah almost always has something in his hands.  He gets "stuck" on certain objects and they can't leave his sight or he melts down.

*He has narrow area of interests. (the alphabet and numbers but will occasionally get stuck on other things like penguins one week, turtles the next, etc.)

*sensory development issues...he doesn't like to touch objects with certain textures and the same goes for food.

So what will we do if Josiah is diagnosed with either?

Well, I feel like God is already granting us peace. We know that He has Josiah's present and future in His hands and all things are possible.

As for a game plan? Well, we will wait on the diagnosis before we get in over our heads. Until then, we are going to focus on seeking wisdom from above and just continue doing what we are already doing.  Thankfully, Josiah has been vaccine free for around two years now. And in that time frame, we have seen great improvement with some of his "abnormal" behaviors and even his communication. I guess as he gets older, his body gets rid of more toxins...Either that or as he grows, the toxin to body ratio becomes less. That is my theory anyway...

So if you are reading this, please keep us in your prayers over the coming weeks.  Thank you. 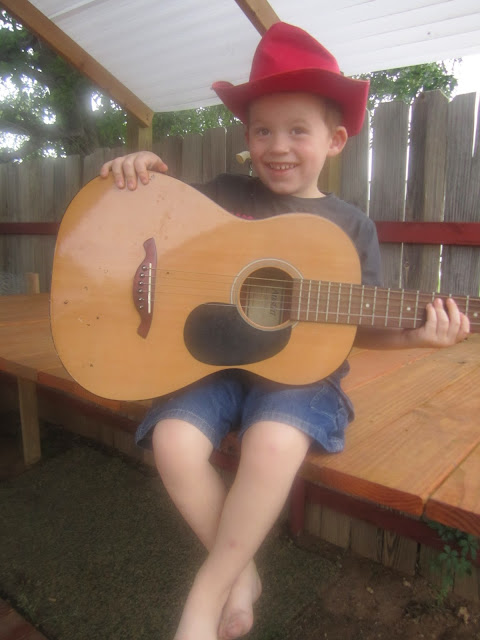 Posted by Julia Channing Rogers at 8:49 AM