Our Addy girl turned 10 months about 3 weeks ago so I figured I better get her 10 month update done before she turned 11 months.  There's just not much time for blogging these days!

10 months has looked like this for our sweet girl:

1. 6 teeth! And this girl takes her teething seriously!...fever, clingy, fussy, lots of slobber, all-night nursing, etc., etc.
2. Addy Jo is also still a really good eater.  Along with nursing, she pretty much eats what we eat within reason.  We stick to a "mostly" no grains, no gluten, no processed food diet.  Most of what she eats is eggs, peas, green beans, bananas, watermelon, grapes (peeled and cut up), squash, zucchini, cauliflower, and the likes.  She also eats tiny pieces of meat chopped up like ham.
3. Addy Jo weighs 20 lbs and is wearing a size 3 diaper.
4.  She sticks EVERYTHING in her mouth.  I have to watch her like a hawk because she has been known to stick bugs and rocks in her mouth!
5. As far as sleeping goes, I'm still trying to figure this little one out.  It usually doesn't take this long for me but she is not a "by the book" baby.  She nurses herself to sleep every night between 8 and 9 o'clock and I put her in her crib.  She usually wakes up 30 minutes later crying but clearly tired and wanting to go back to sleep.  So I rock her back to sleep usually by nursing her some more and back into the crib she goes.  On a good night, she stays asleep in her crib until around 2 o'clock when she wakes up again.  At this point, I've usually only been alseep for 2-3 hours and so instead of rocking her back to sleep and putting her in her crib again, I just put her in the bed with us and we both fall back asleep while she nurses.   When our alarm clocks go off at 6 o'clock every morning, she usually stirs a little and sometimes wants to nurse.  She then falls back asleep until about 8 o'clock.  Often, she just sleeps through the alarms though.  I know that a lot of people say that at 10 months a baby should be sleeping through the night in their own bed.  After three kids, I have kind of thrown that notion out the window.  I've been reading a lot lately about the importance of letting a baby nurse on demand throughout the night.  I wish I would have known all of this while the boys were babies.  With them, I can remember being so sleep deprived because I would rock them back to sleep every time they woke up during the night.  But letting Addy sleep right next to me during the night and nursing herself back to sleep when she wakes has made such a difference in how much sleep I get during the night. So I'm just going with the flow right now and not worrying too much about her not sleeping through the night in her own bed.  The day will come.  Right now I'm enjoying all the snuggles.
6. On most days, Addy Jo takes two naps during the day. They are not usually very long.   Today we are experimenting with just one nap to see if it will help her sleep better at night.  I'm also hoping that just one nap means that it will be one LONG nap and not two short naps.  I'll update with how that goes later!
7. Addy Jo was born with blue-green eyes like mine but they are starting to change color.  Now they look more brownish-greenish like Jordan's eyes.  Who knows what color they will settle on.
8. At 10 months, Addy Jo has quite the personality.  She is pointing, waving, saying "bye bye", "mamamamama" and "dadadadadadada" and lots of other things that we don't understand.  She also has a really cute growl....and an adorable "belly laugh" when she gets really tickled.  When Mickey Mouse Clubhouse starts playing she starts clapping and smiling really big..  It's precious. And you should see her play "peek a boo".  We give her a rag and she puts it over her face and pulls it off really fast laughing hysterically.
9.  She LOVES her brothers.  And they LOVE her.  They are very protective of her and keep a close eye on her.  If I don't see her stick something in her mouth that she is not suppose to have, one of them always lets me know.  They also provide her quite a lot of entertainment.  I don't think she ever gets bored!
10. Our girl is also VERY mobile.  I fully expect her to be walking within the next month or so.
11.  Addy Jo is a BIG mama's girl.  Naturally, I'm okay with this. : ) 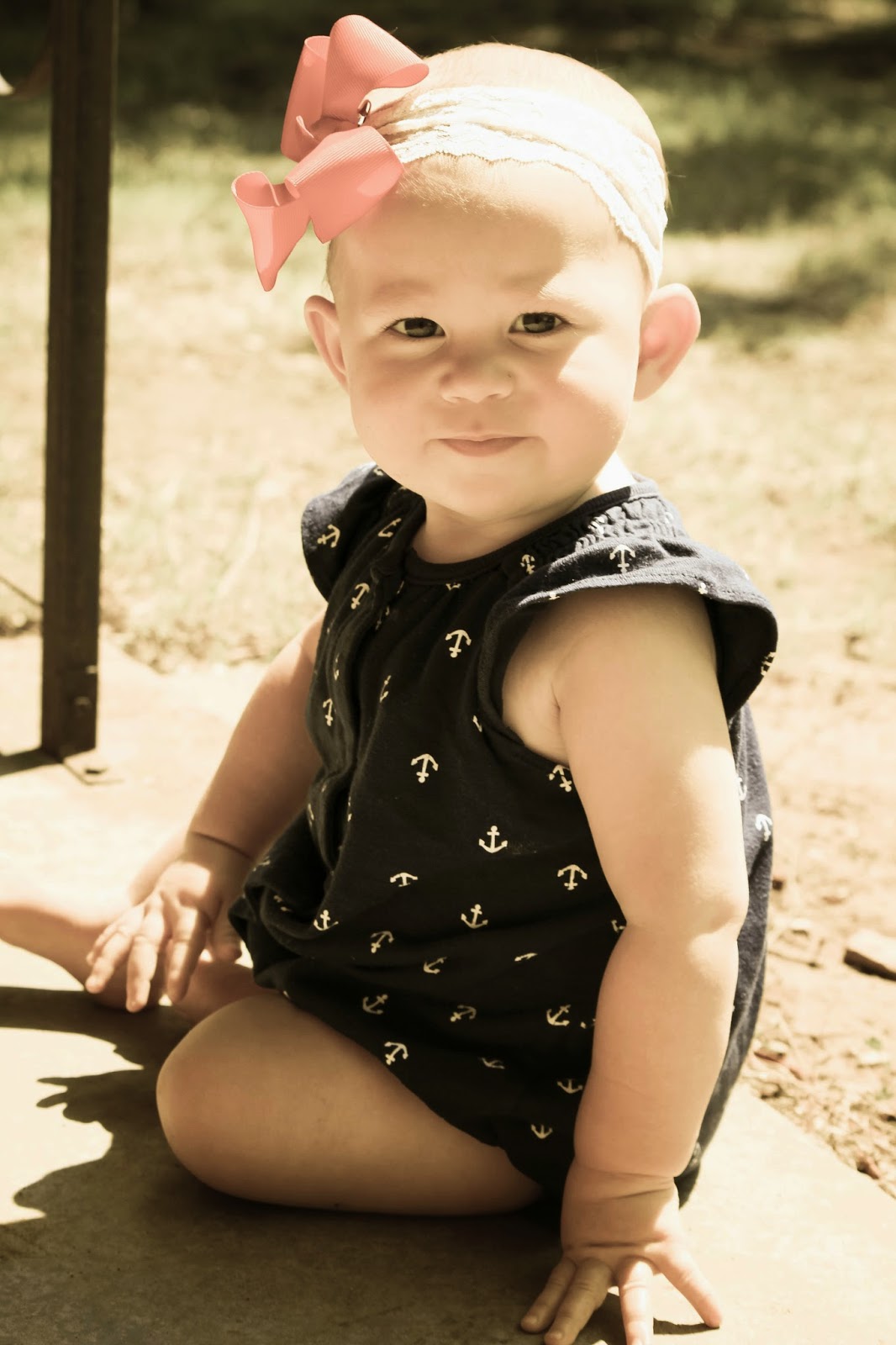 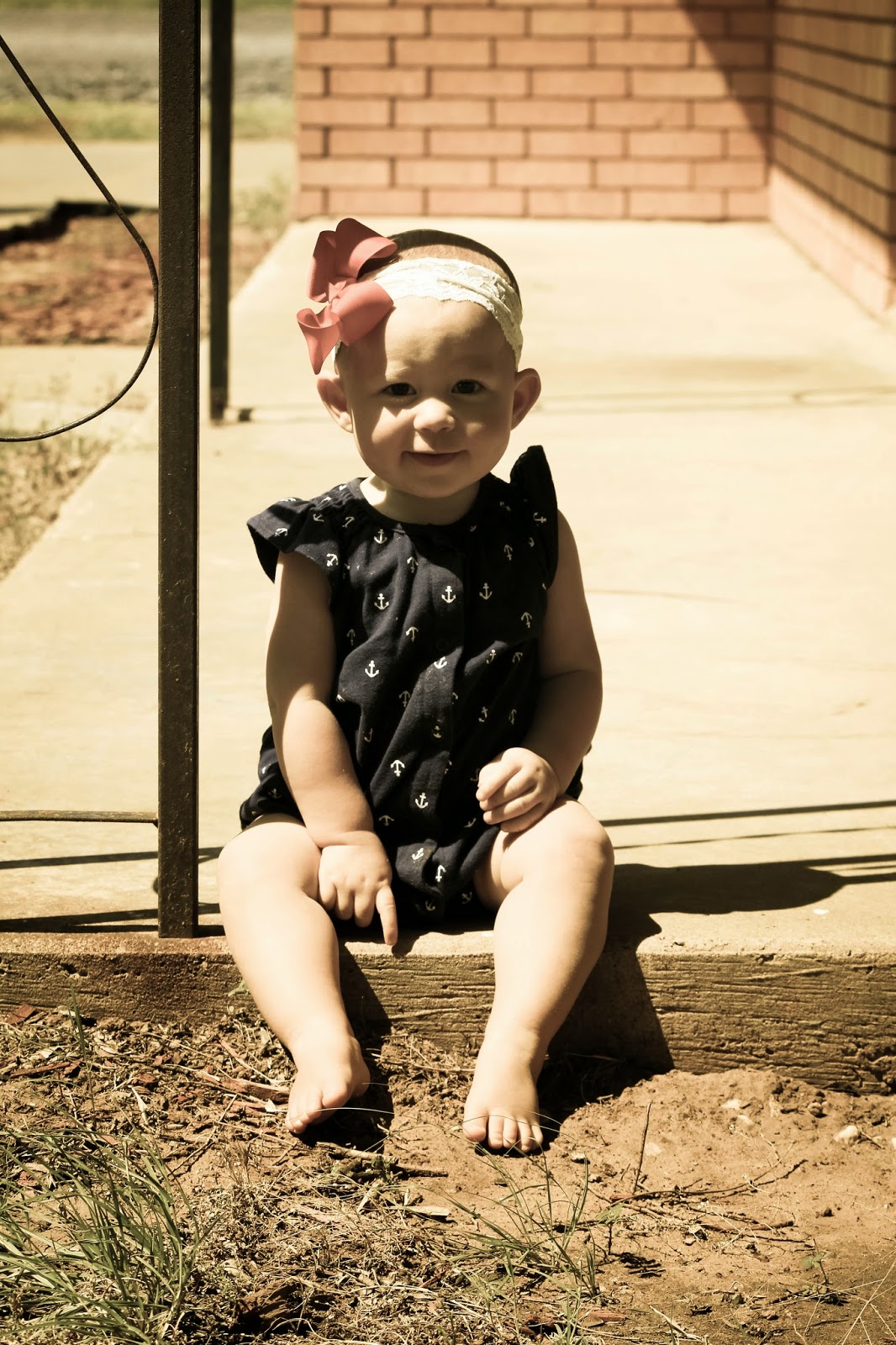 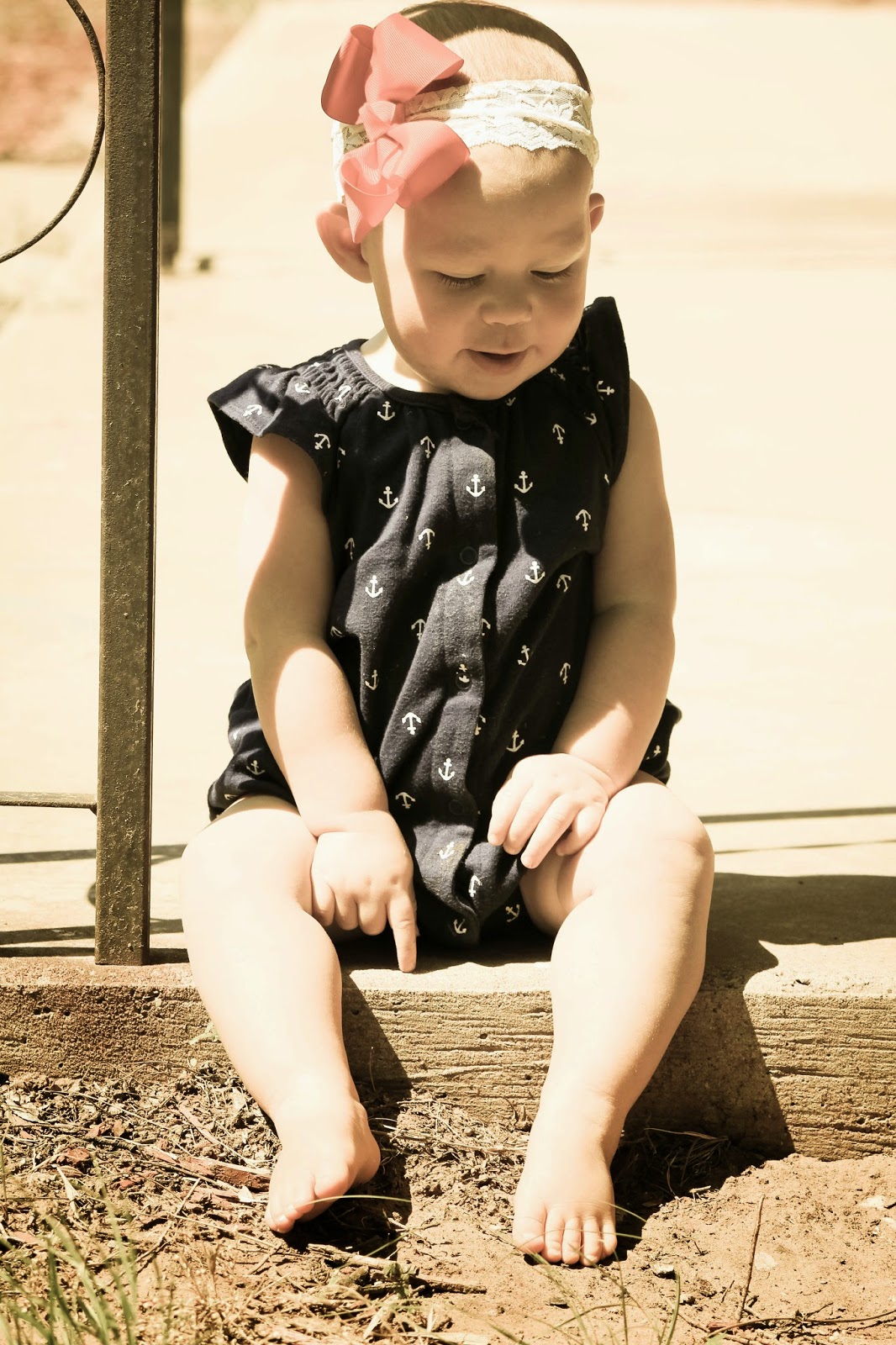 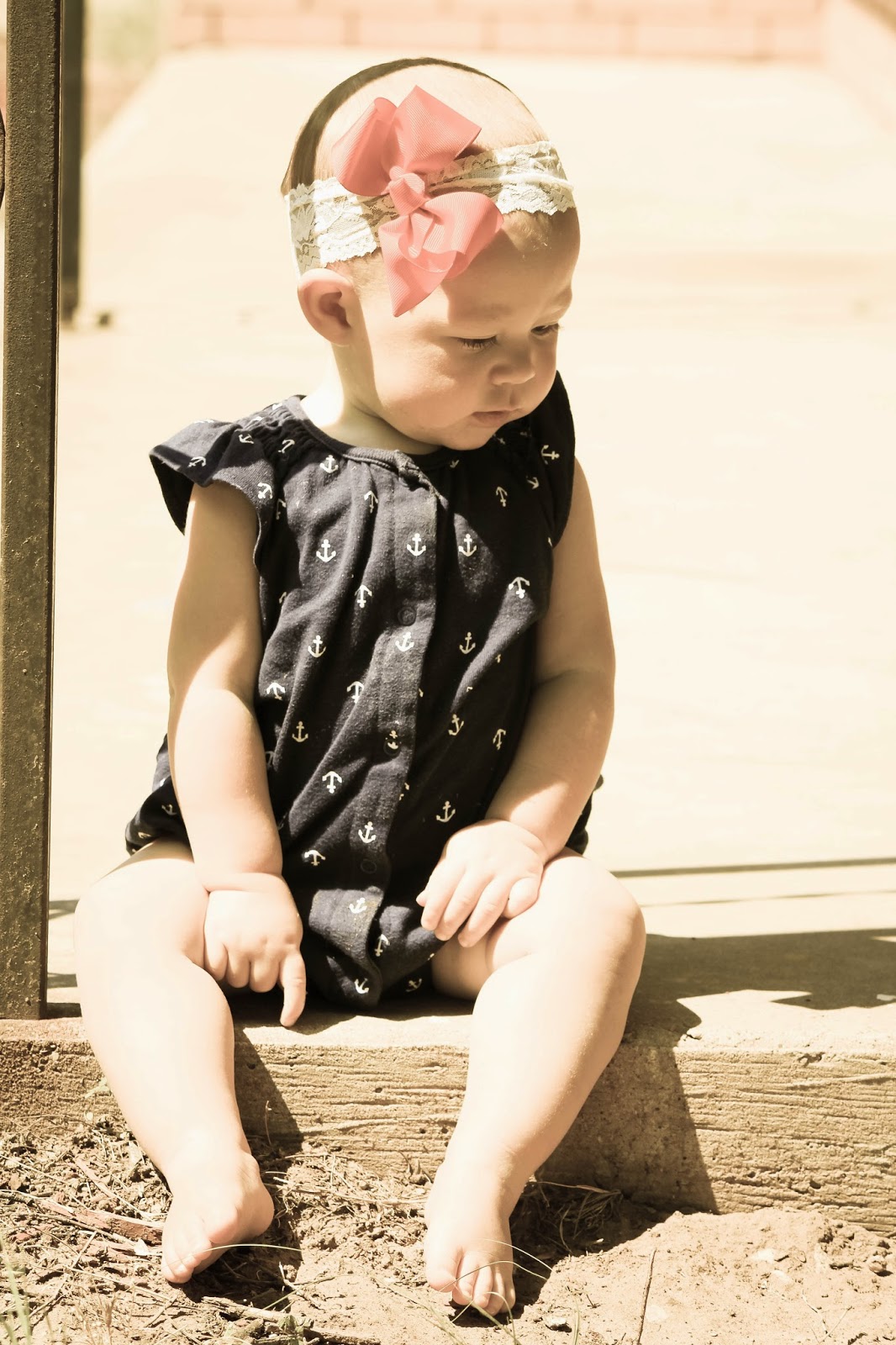 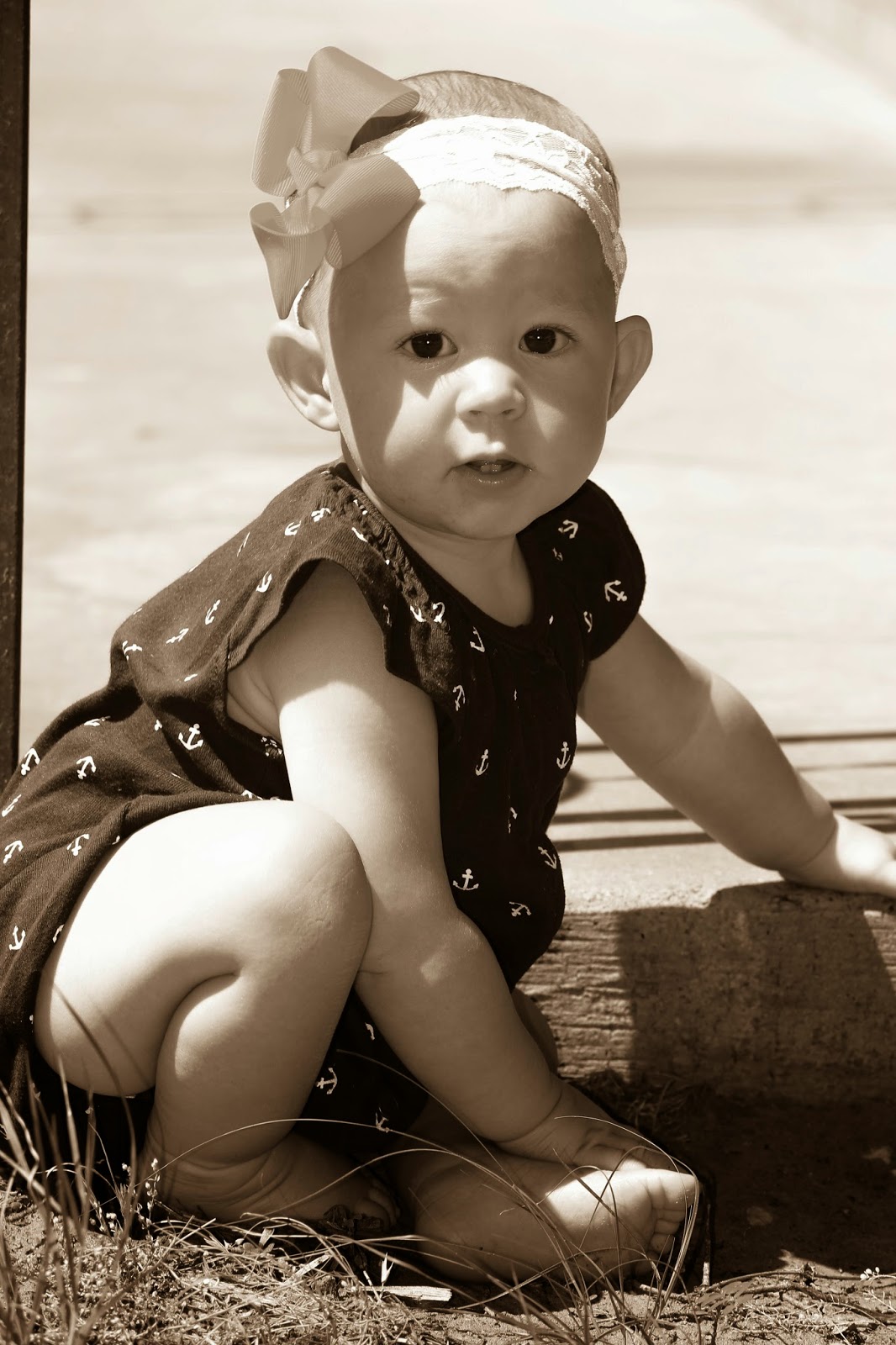 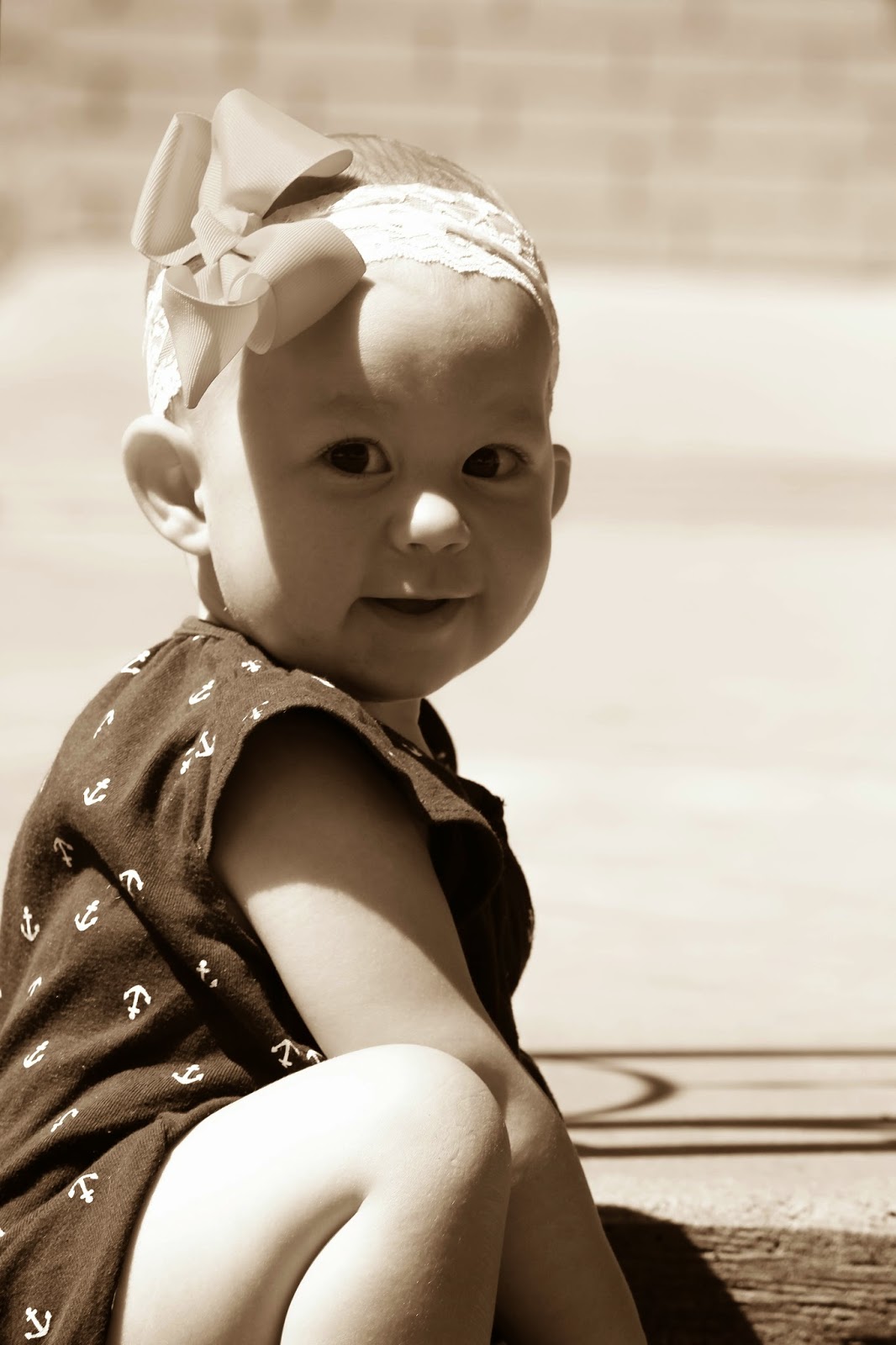 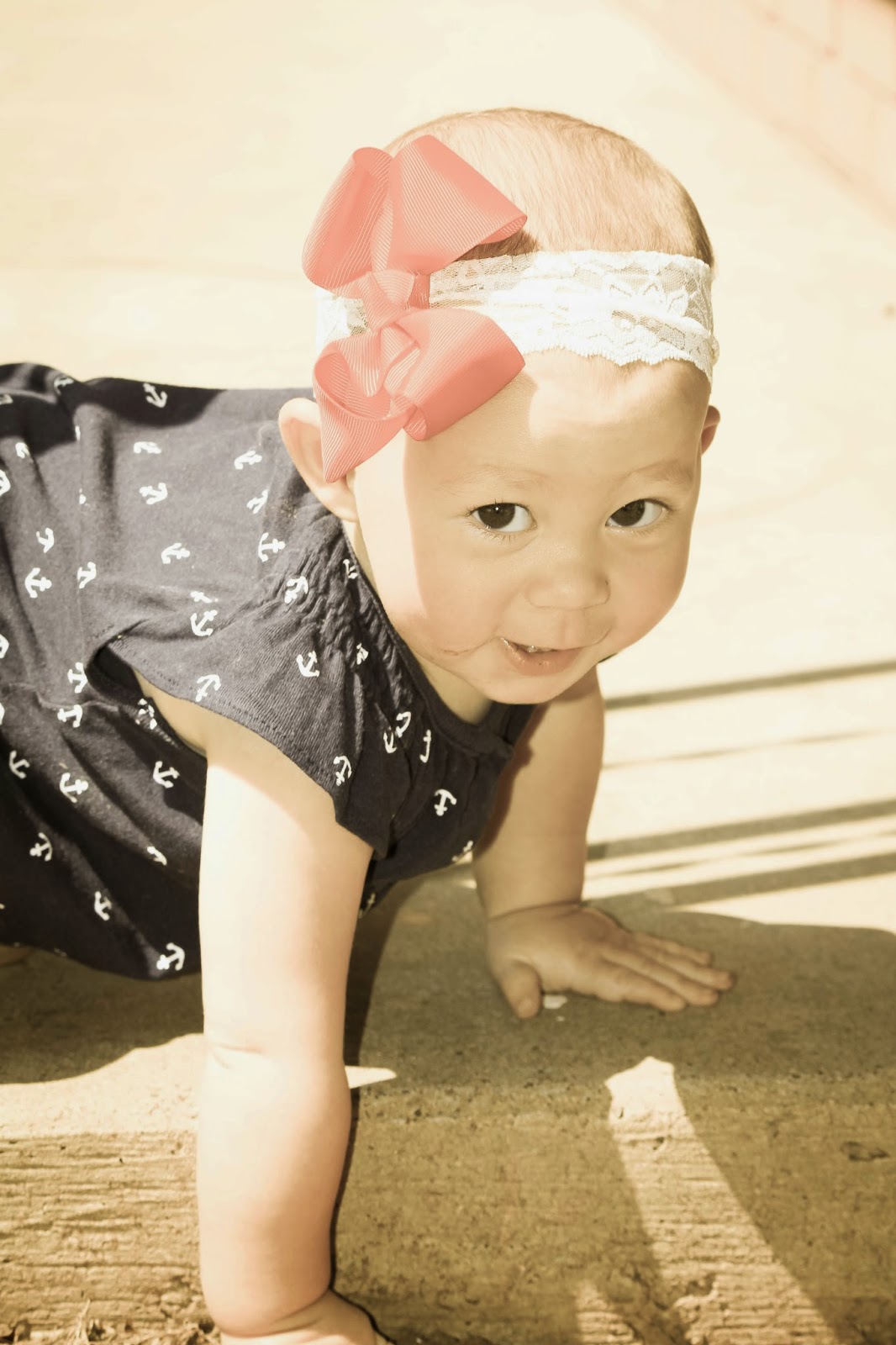 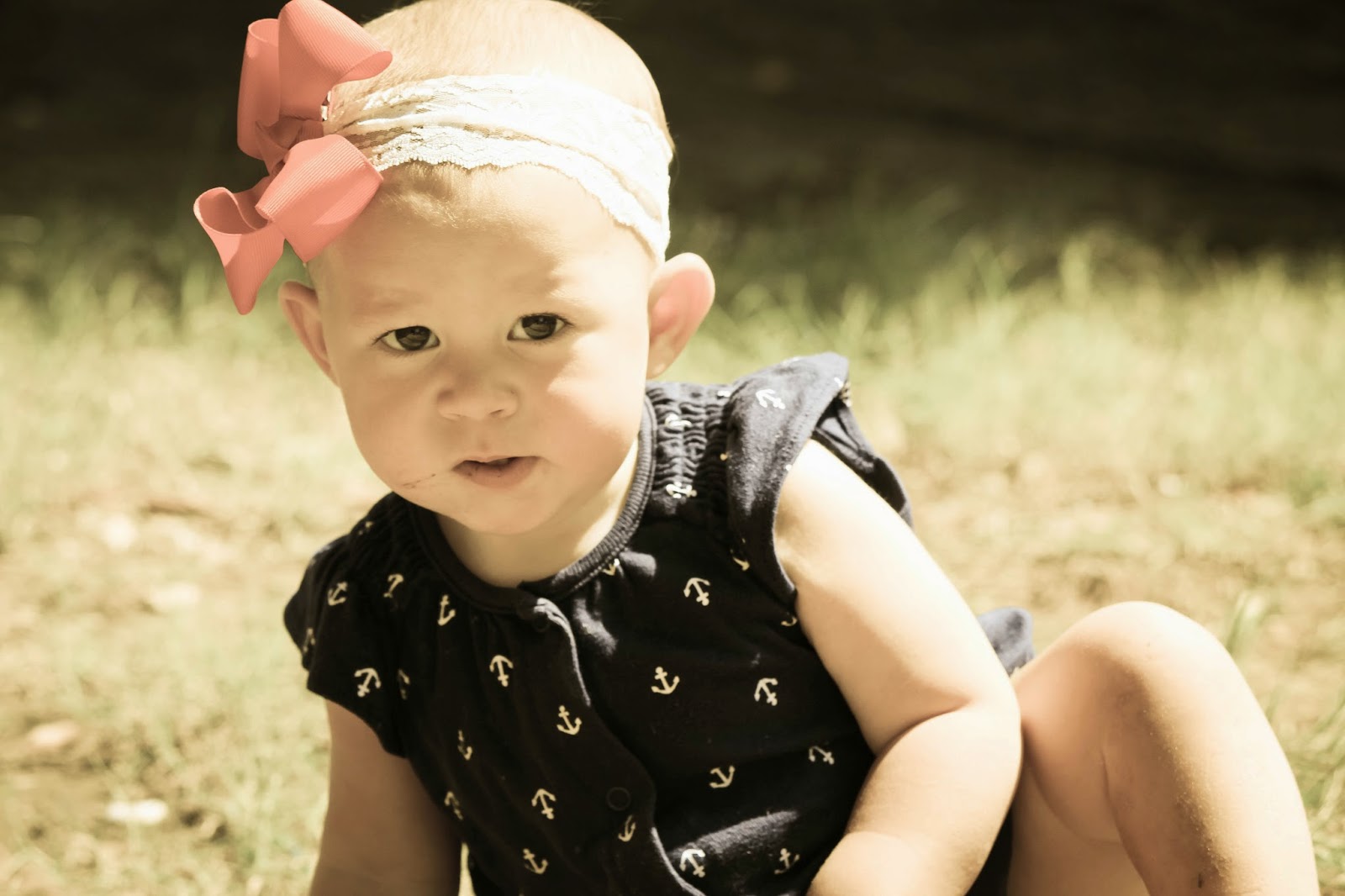 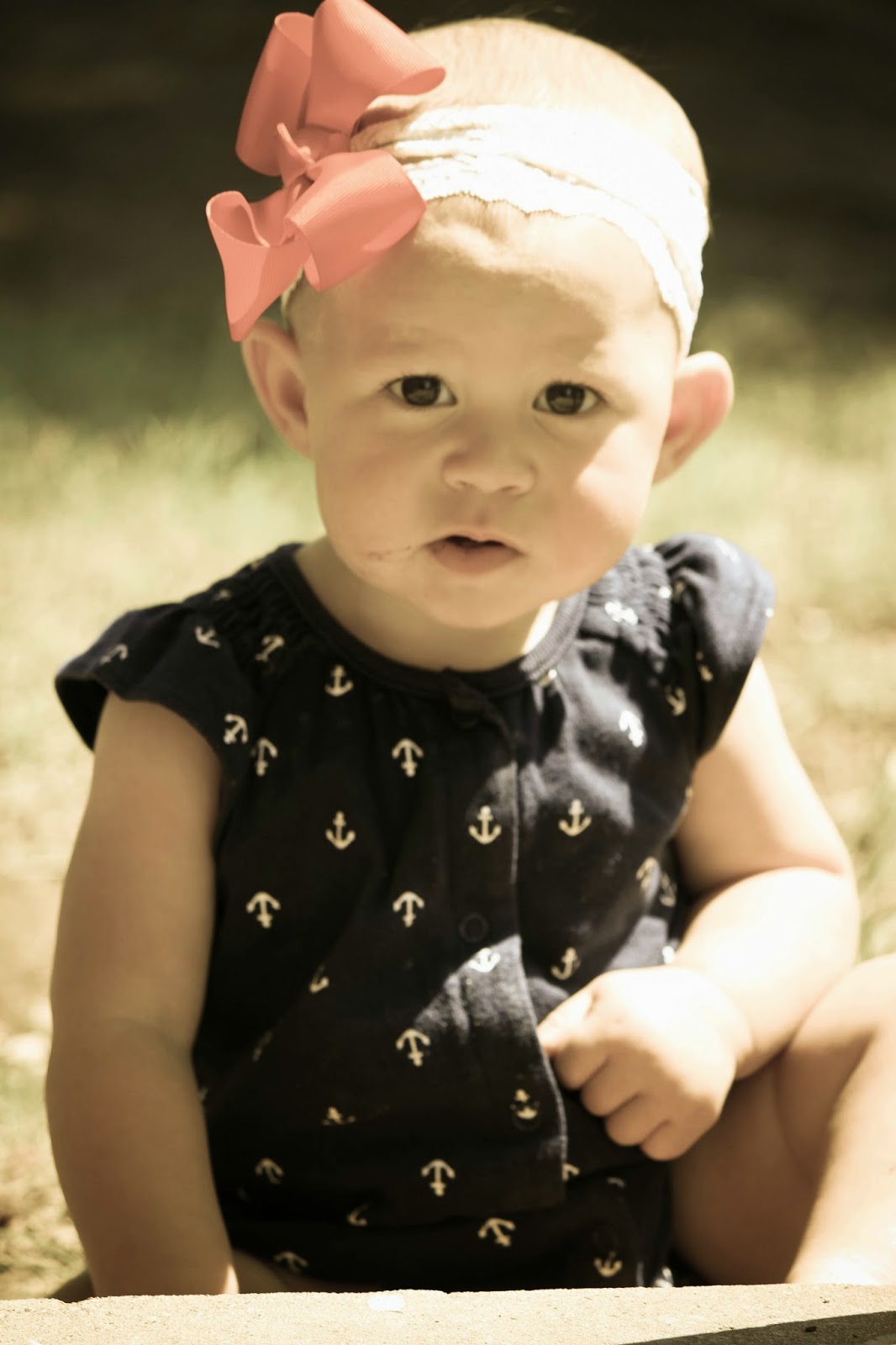 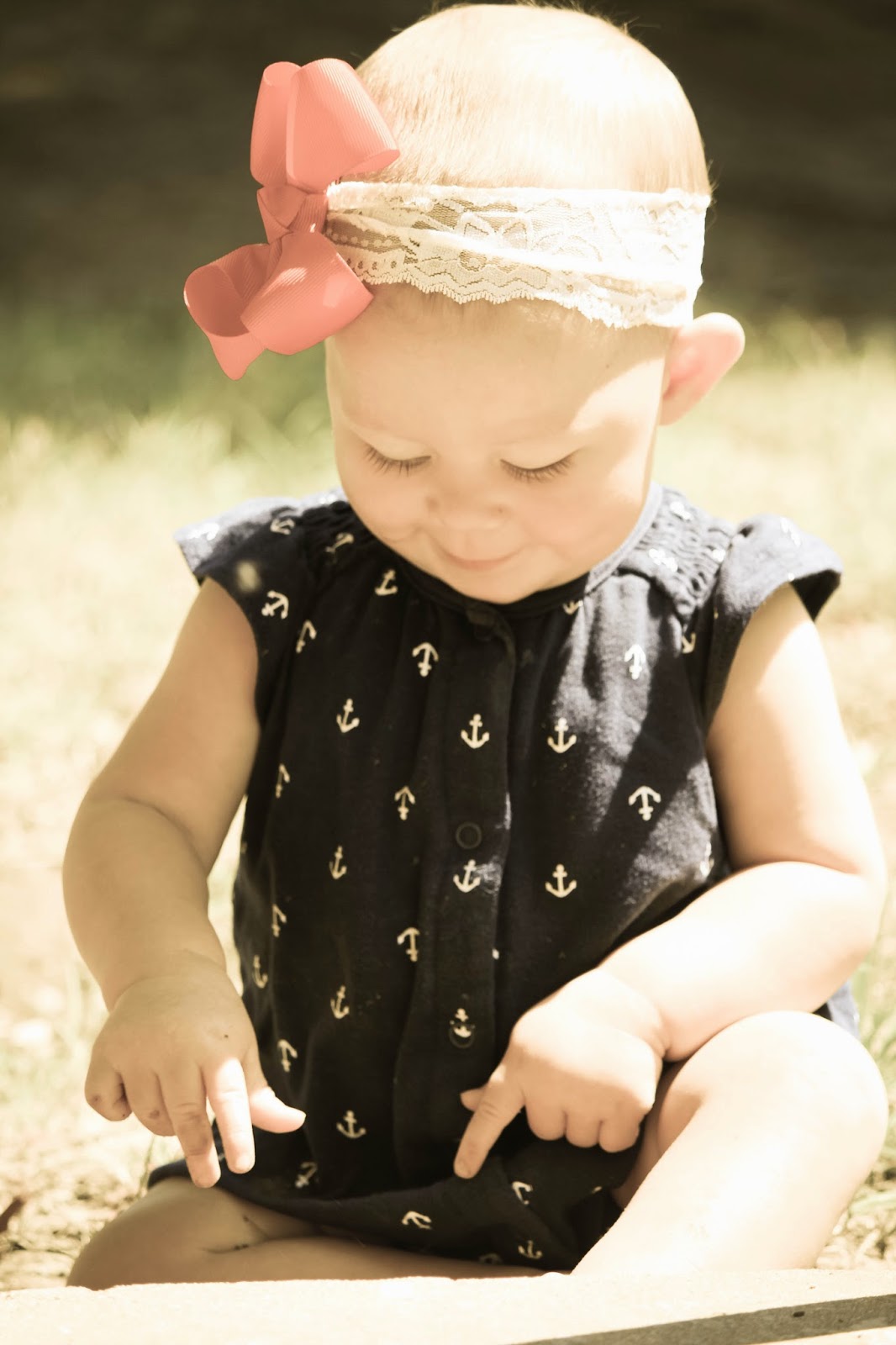 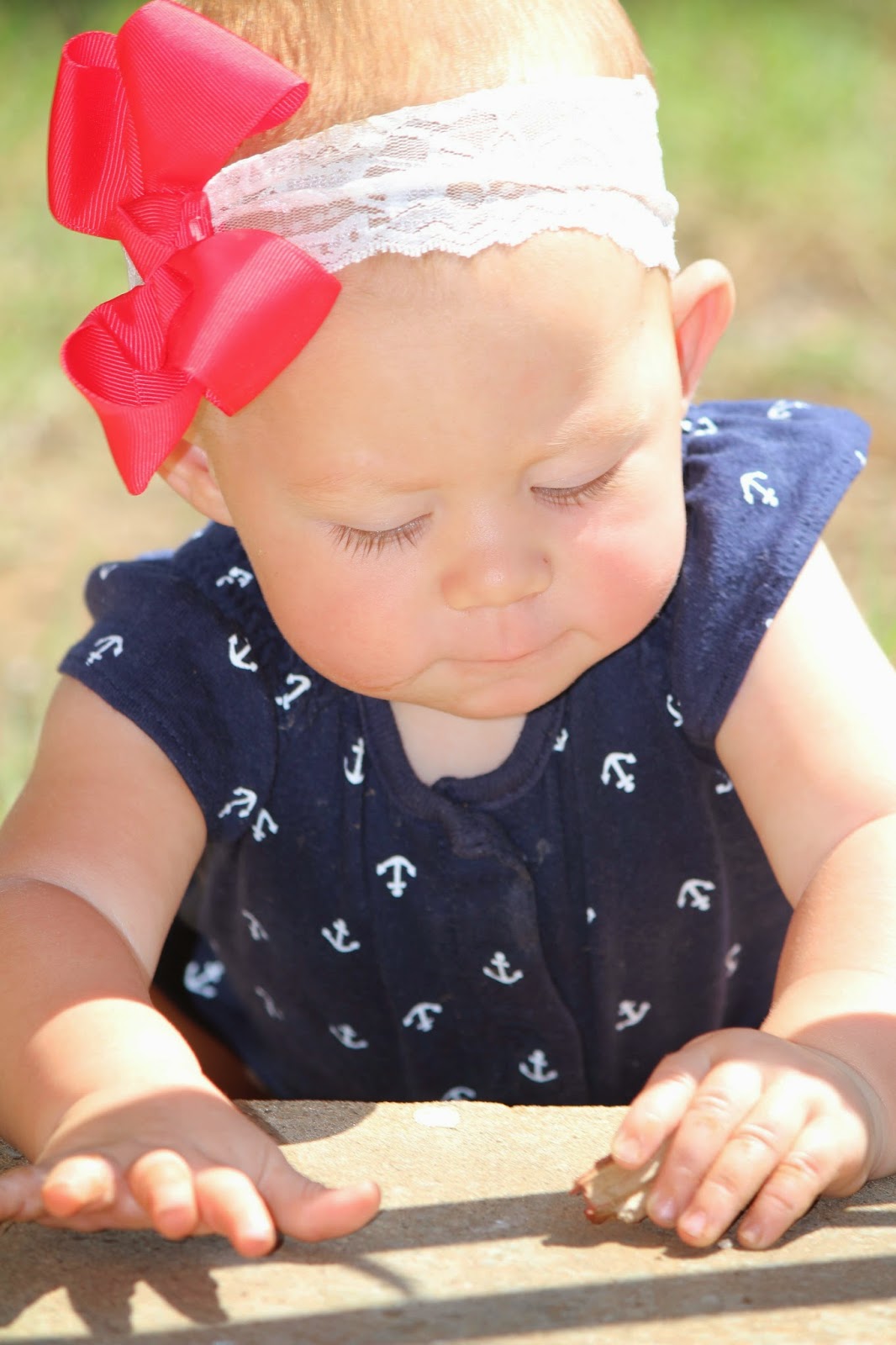 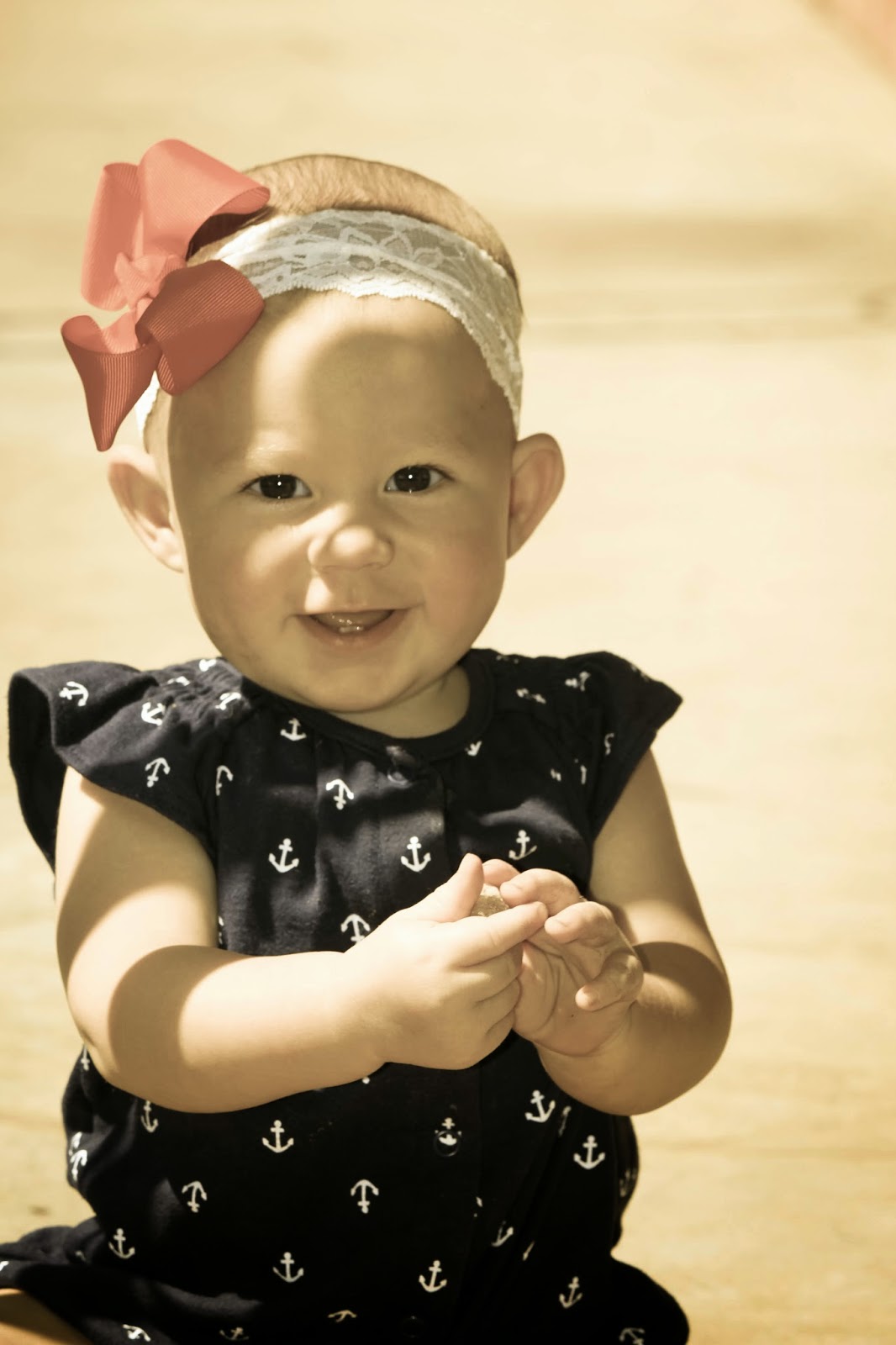 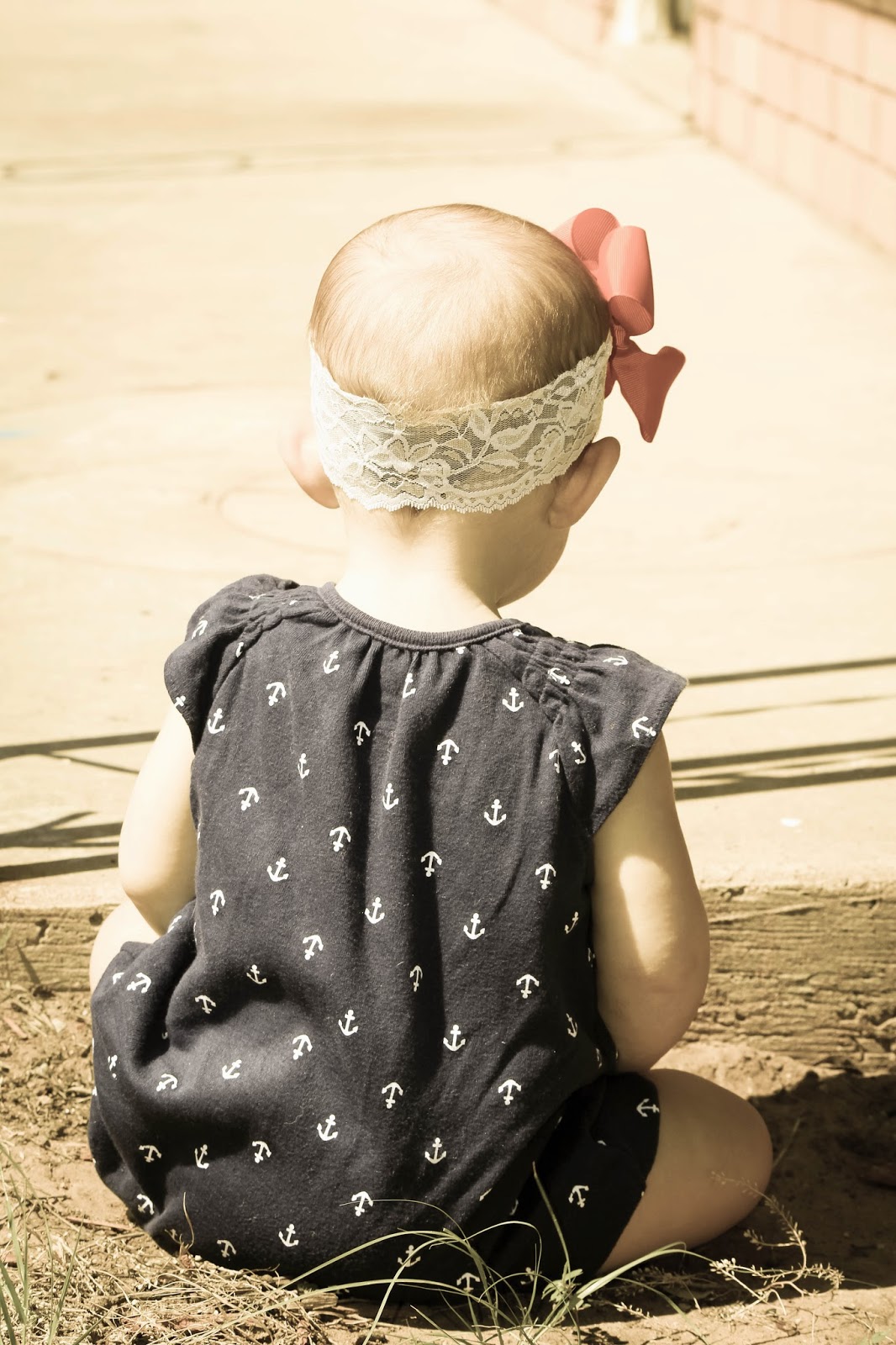 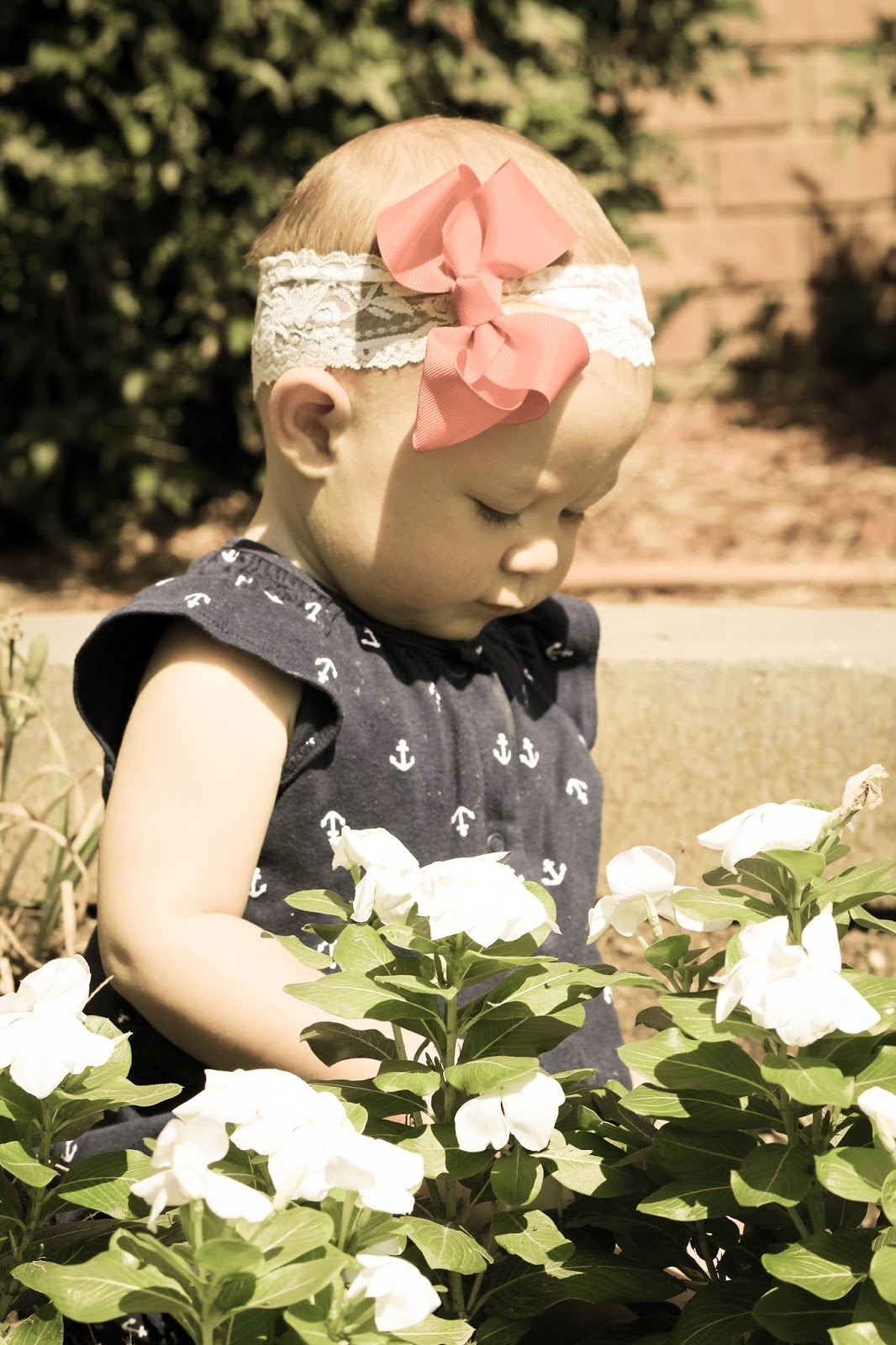 Posted by Julia Channing Rogers at 11:58 AM