What is this creepy noise I hear? It's nothing- I hear nothing besides the white noise from Addy Jo's baby monitor.  As I type this, the boys are at their first day of preschool.  Eli is in the three year old class and Josiah is in the four year old class.  I honestly never thought that I would be writing this.  When the Lord called us to homeschool while I was pregnant with Josiah, I thought that it would be for our children's entire education from pre-k to high school.  Little did I know that God had something else in store.

The last few years have been a blessing getting to oversee Josiah and Eli's education.  It has also been tough and tested my faith and patience to the utmost.  But a blessing still.  I've made mistakes and we have had our share of bad days but I truly feel like God's grace has covered us and I have given them the best start possible.  But when the Lord calls us to do something, he makes it obvious and he makes us miserable until we obey.

I started feeling confused a few months ago.  This is when the Lord began to break down the walls of my legalism.  It all started when my bible reading led me to the Gospel.  I have read the Gospel many times but this was the first time that I really dug deep.  I was immediately convicted.  I started examining myself and I was ashamed at just how much I had in common with the Pharisees whom Jesus was constantly rebuking.  The Pharisees saw everything so black and white and they missed the big picture.  They missed Jesus.  And this is where I found myself: Without realizing it, I had been serving my own religion and man-made rules.  And one of the biggest rules that I had made was that all women should homeschool if they were married and had children. I feel ashamed just typing it out.  I never openly rebuked anyone for not homeschooling but the thoughts were in my head.  I even twisted scripture and read it out of context to fit this idea.  But the Lord has since changed my heart.  I truly believe that it is a calling.  And sometimes the Lord calls us to something for a season and something different for another season.  I have no doubt that the homeschooling the boys have received for the past few years was a calling from God.   It's what he wanted me to do.  But now that is changing.  But I'm getting a little ahead of myself....

A few weeks after my mind set began to change and the Lord began to free me from my legalistic bondage, we found out that we were probably going to be moving (see my previous blog post).  Homeschool was put on a pause.  We did end up moving and our new church has a wonderful preschool program where the bible is taught and everything  There was a little bit of a desire starting to grow within me to consider it for the boys but I kept ignoring it and pushing it out of my mind. My legalistic mind set on homeschooling had changed but I still thought that it was what God wanted me to do.  Looking back now,  I believe that little desire that I kept pushing aside was actually the Holy Spirit nudging me. But I didn't see that at the time and I just kept ignoring Him.  The moving process had me distracted too.  I'm a perfectionist (if you didn't already know that) and that just doesn't pair up well with moving with three small children.  But we got it all unpacked pretty fast and I started back to homeschooling the boys. And as much as I wanted it to be-my heart just wasn't in it.  I didn't feel that desire anymore.  At first I dismissed these feelings as just that-feelings.  And I know that my feelings can lead me down the wrong path.  I chalked it up to being physically and emotionally exhausted.  I prayed about it A LOT.  I asked God to clear my mind and give me that desire and passion back.

That Monday, we attended homeschool co-op for the first time.  I really thought that it would get me pumped up again.  But it didn't.  Don't get me wrong, it was great and the ladies ran it very well.  But when God has something else in mind,  He can't be stopped.  I came home that day even more confused.  And I know that my God is not the author of confusion.  So I prayed more.  The next day, I went about our homeschool routine as usual.  But I was miserable.  It didn't feel right.  I started to evaluate my feelings.  I thought that I was feeling this way because of sin and selfish desires.  Afterall, I was exhausted and I just wanted some quiet.  So I pushed through thinking that those feeling would go away.  We took lunch up to the church for Jordan and while there, we saw a class of preschoolers walking by.  The boys flipped.  They wanted to go with them so badly.  They cried and cried.  This happened the next day and the next day.  All they could talk about was wanting to be with "friends".  This is when I started considering that maybe my confusion about homeschooling wasn't laced in sin and selfish desires.  Now my children were wanting something different too.  Of course, I know that children do not always know what is best for them but this just added to my confusion.  I didn't have the desire to homeschool anymore and now my children wanted to be with classmates.  In tears that night, I explained to Jordan how I had been feeling.  He always makes me feel better.  He explained that the Lord will make us miserable until we obey and that if God's calling was for the boys to attend pre-k, then homeschooling would never work and we would continue to feel miserable. That expalined why homeschooling had worked for us the last few years but now it wasn't.  God was changing things up.  I was just being slow to catch up.

So the next day, we decided to visit the preschool.  Although there was a year long waiting list, there were two spots opening up for the exact ages of Josiah and Eli.  The spots were for Tuesday, Wednesday and Thursday from 9-2.  That is NOT coincidence.  I also met the lady that would become Josiah's teacher and she was a sweetheart.  When she mentioned that she specialized in autism/special needs, I was so thankful.  It was another sign.  He would be able to be in a class with "normal" kids with a teacher who understood his diagnosis but also understood that he could be pushed and trained to overcome his autistic traits.  I was thrilled!

We went home feeling such peace.  We decided to enroll them. And like I said, today was their first day.  I would like to mention that I didn't cry when we dropped them off.  That's probably because they didn't cry.  That's a good thing or I would have been a wreck.  It also helps that the preschool is at the church so Jordan's office is literally right there. In fact, Jordan came home for lunch today and he told me that he checked on the boys a couple of times.  Josiah saw his daddy walking up and he said, "No!" Jordan said, "I'm just checking on you.  It's not time to go yet." Josiah replied with, "Okay. Bye!".....It thrilled my heart when he told me that!

The boys are now out of school and they have been talking about their day for the last two hours.  Needless to say, they had a good time! I was able to talk to their teachers for a few minutes when I picked them up and they had great things to say.  I am so excited for this new experience for them and for me.  The Lord truly knows what is best for me and for them.   I am thankful that He makes it obvious when we need to go in a different direction.  I never would have made this decision if He had not pushed me and made me miserable.  He has a way of making His will known.

Does this mean that I will never homeschool again?  Absolutely not. I'm trusting that the Lord will make it obvious if that is what He wants in the future.

And can I just say that I really really enjoyed my one-on-one time with Miss Addy Jo today? It was great.  She took a good nap so I had some free time.  I didn't know what to do with myself.  And when she woke up, we played.  Just me and her.  She was happy to see her brothers at 2:00 though. And so was I! : )


Here's some pics from our first day: (Josiah wasn't cooperating for the first two pics.  He just wanted to hurry up and get to school!) 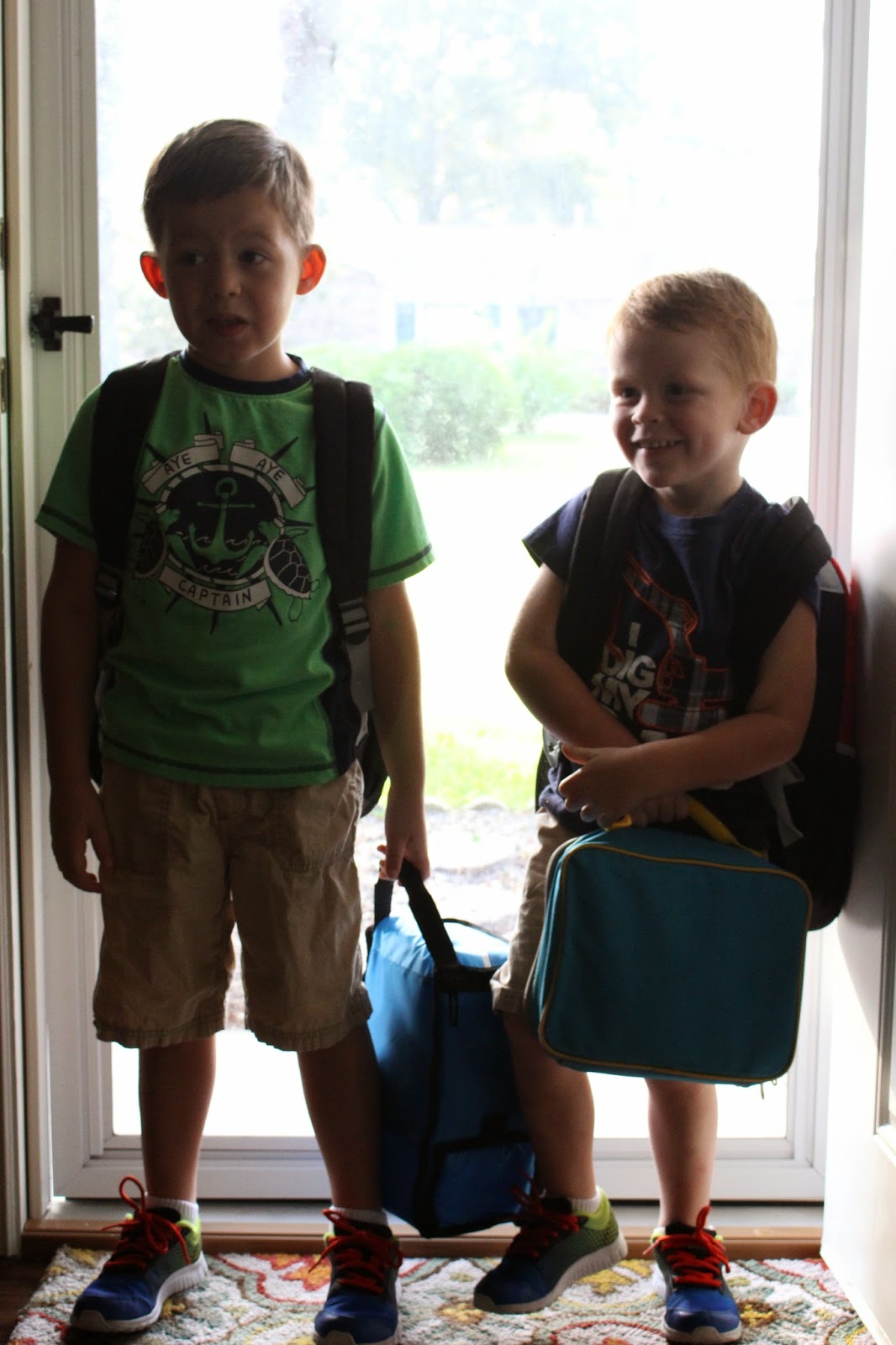 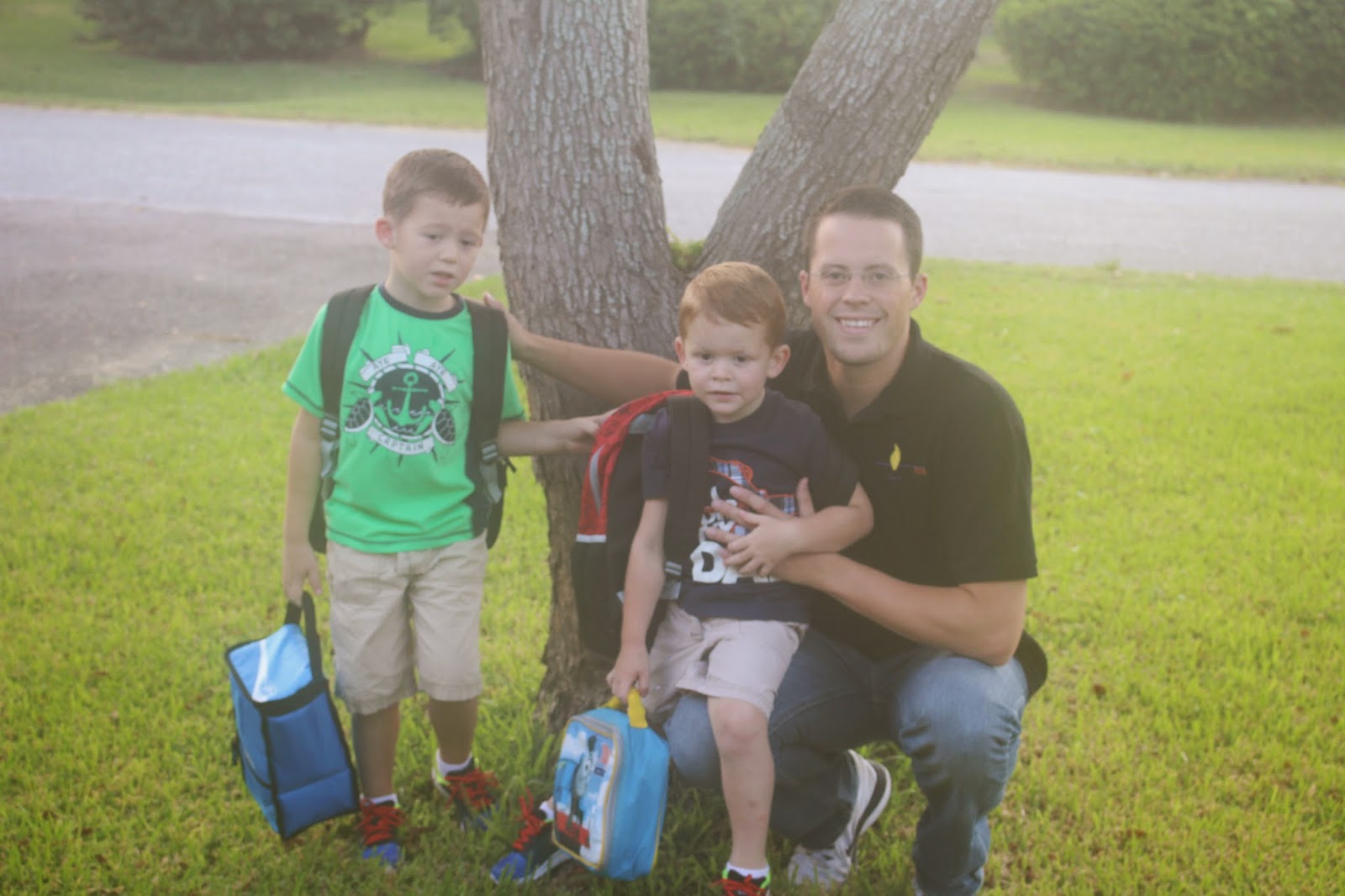 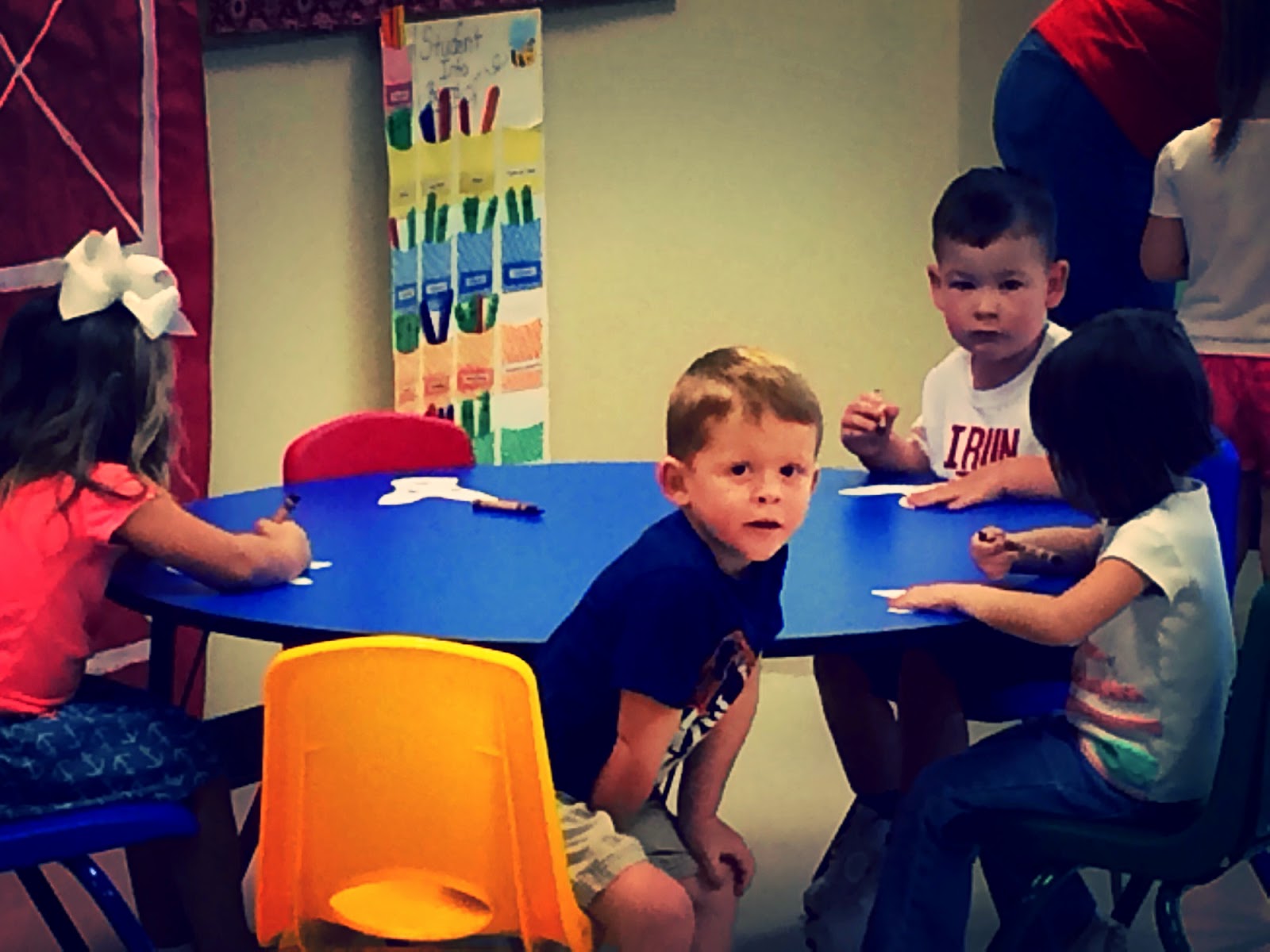 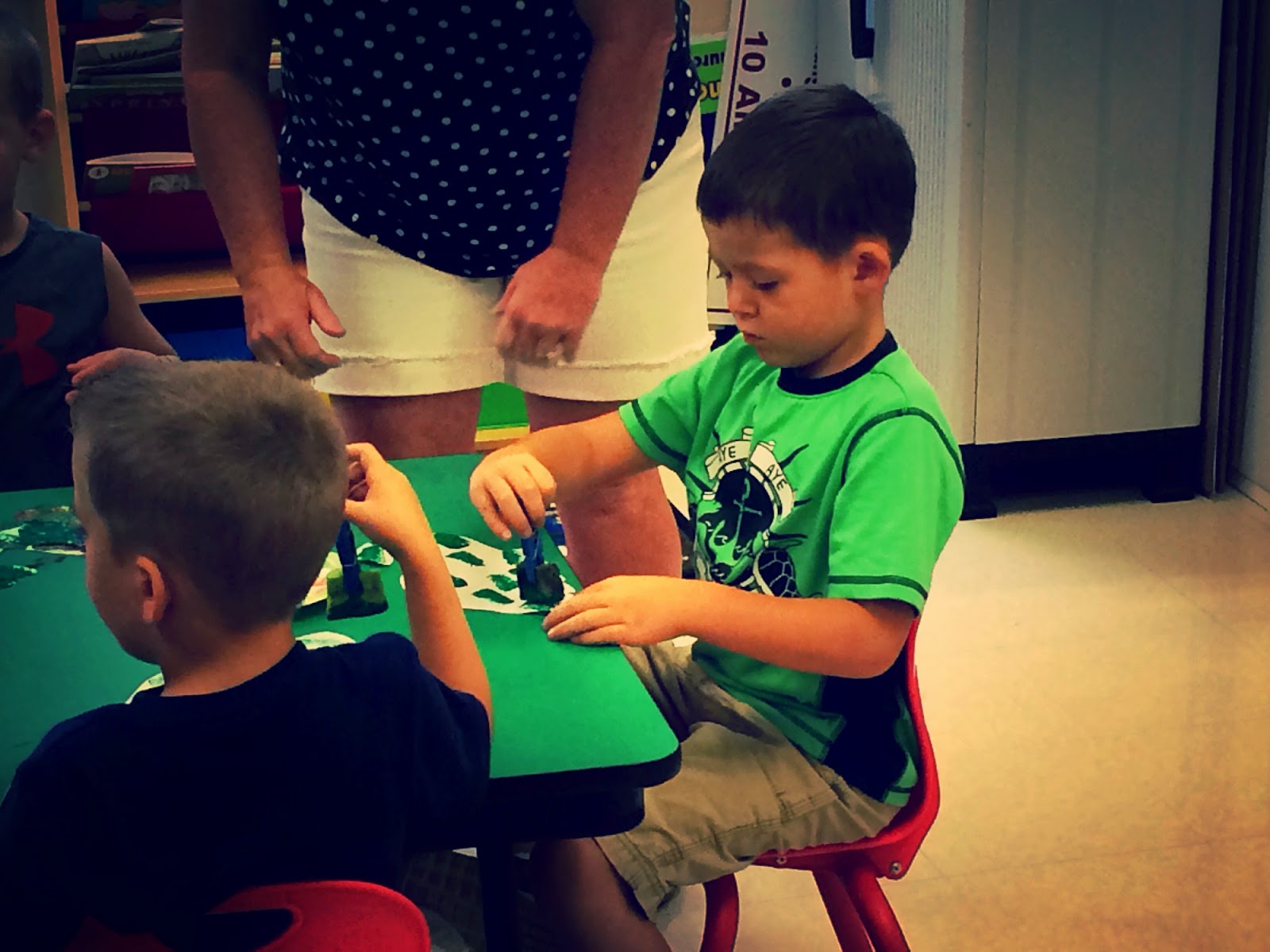 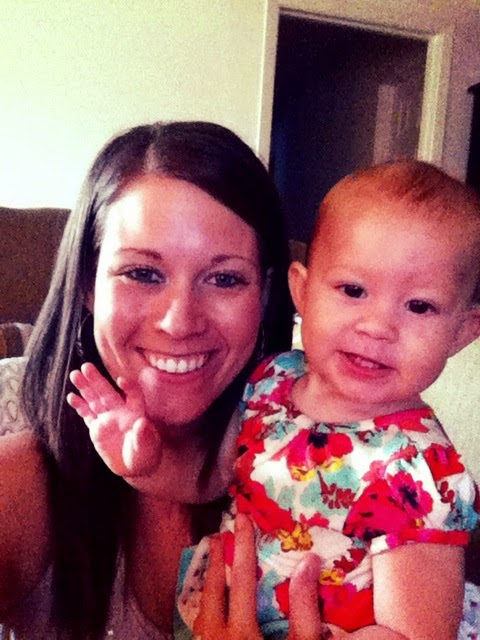