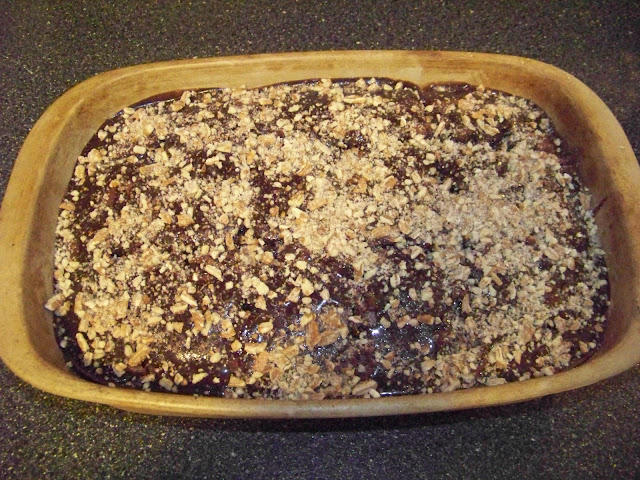 This cake creation happened about on Tuesday night at about 11:00 pm when Jordan and I started craving something sweet and unhealthy...I don't keep a lot of sweets in the pantry because let me be honest, I'm a meat and potato type girl.  It's pretty rare that I get the hankering for something this sinfully sweet.  Okay, so it was 11:00 pm and eventhough my craving for sleep was a lot greater than my craving for dessert, Jordan insisted that we raid the pantry and create something out of what we could find. This is what we found:

Jordan suggested that we melt the chocolate to make a topping for the cake since we didn't have any icing.  So while I made the cake Jordan unwrapped the caramel filled kisses and crushed the pecans...then he preceeded to tell me that he was sleepy and I found him lying in the bed with Josiah...just like a man! Of course, I told him to get his booty out of the bed since he was the one who started this whole cake creation anyway, to which he replied, "I'm not sleeping...just laying here with my buddy."............sure..............back to the cake....

So after the cake was done cooking and cooling, I melted the semi-sweet morsels and kisses on the stovetop using the double-boiler method by placing a bowl filled with the chocolate inside of a pot filled with water....then Jordan showed back up (just in time) to suggest that we go ahead and cut the cake into squares so that the chocolate topping would seep into the cake like a sponge.  I have to say that this was a great idea! (If you have had Chili's Chocolate Molten Cake then you know what I'm talking about!) So we cut the cake into squares, poured the topping over the cake, and sprinkled the crushed pecans on top. This is what a cut piece looked like: 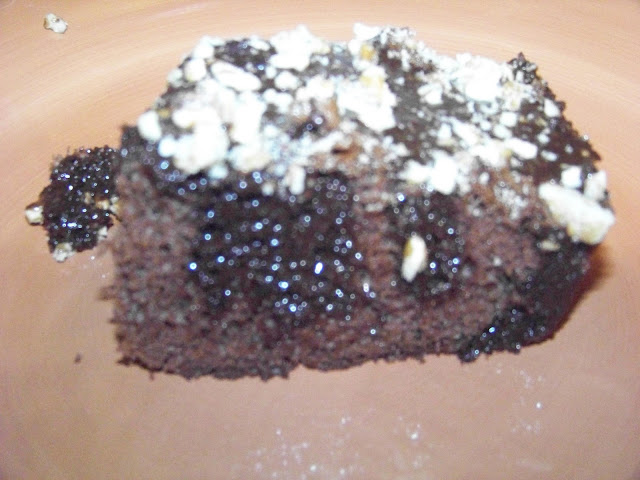 ﻿And yes, it really was as good as it looks...I just wish that we would have had some Bluebell Vanilla Icecream to go with it......