Oh how I wish that someone would have shared this advice with me that I am about to share with you 5 months ago! It's funny how after you have one baby you think you have everything so figured out until the second one comes along and is completely different from the first.  Take for example, Josiah and Eli...Josiah was sleeping through the night by the time he was two months old.  He would fall asleep nursing in our bed and would sleep from 9pm-5am without stirring.  He hated to be swaddled but loved to be up close to us.  Eli, on the other hand, will fall asleep nursing but only when he is cradled.  He wants to sleep in his own bed without anyone touching him.  He loves to be swaddled though.

When Eli reached 2 months I just assumed he would start sleeping through the night just like his big brother did.  However, at 3 months, he was still waking up around 2 am and sometimes again at about 5am. This wasn't so bad but out of nowhere he just started waking up at 1:00, 3:30, 5:00, and 6:30 am.  At first I assumed it was just a growth spurt. Eli is now 4 1/2 months old and up until a couple of nights ago, was still waking up around 1, 3, 5 and 6. To get him to go back to sleep I would nurse him for about 5 minutes and he would pass out.  Unfortunately, this established a really bad sleeping pattern for him.  He got in a habit of waking to nurse every 1 1/2-3 hours that his body just automatically woke up at these times even though he wasn't hungry.  I kept on hearing that by two months a baby should be able to sleep up to 8 hours straight, if not before then, but no one ever told me how so I had to figure it out for myself.

I just thought I would share.  If this post only helps one sleep deprived momma out there then I will be happy! : ) 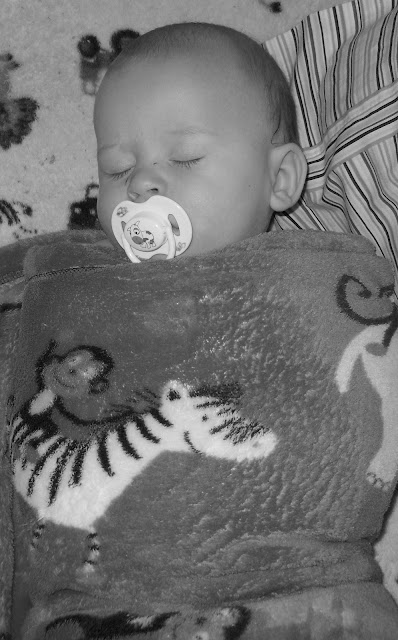 Posted by Julia Channing Rogers at 8:30 AM